Close menu
The correct use of a Kobudo weapon can produce a stimulating and practical means of “extension” training. It offers a means of martial arts training and discipline. Weapons training teaches the meaning of control, timing, distance, and flexibility as one unit. The practitioner is required to possess speed, coordination, strength, and endurance in utilizing the respective weapons.
Instructor Brendan Donnelly holds the Rank 5th Dan  in Kobudo (International Combat Kobudo Union)
KoBudo  is a Japanese term that can be translated as “old martial way.” It was formerly known as Kobujutsu (“old martial art”), however, with the advent of martial arts generally becoming practiced for reasons other than that of practicality, it is now more commonly known as Kobudo. Within Japan, it can refer to any traditional martial art and is synonymous with koryū.The Okinawa seishinryoku kobudo emphasizes the training traditional okinawa seishinryoku kobudo and modern Okinawa seishinryoku kobudo. The seishin kobudo includes the following weapons:Bo-Tonfa-Sai-Jo-Nunchaku-Bokken.
NOTE: All of the weapons in this system are taught within the concepts of self- defense and the laws, which govern them.
For the most part Seishin free style applies Bukiwaza (Weapons techniques) to already learned open hand Kata from Karate while other Kata which are unique to each weapon are also taught at various levels.
Bō
The bō is a six-foot long staff, sometimes tapered at either end. It was perhaps developed from a farming tool called a tenbin: a stick placed across the shoulders with baskets or sacks hanging from either end. The bo was also possibly used as the handle to a rake or a shovel. The bo, along with shorter variations such as the jo and hanbo could also have been developed from wa 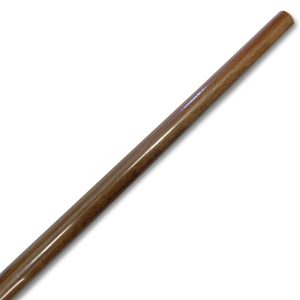 lking sticks used by travelers, especially monks. The bo is considered the ‘king’ of the Okinawa weapons, as all others exploit its weaknesses in fighting it, whereas when it is fighting them it is using its strengths against them. The bo is the earliest of all Okinawan weapons (and effectively one of the earliest of all weapons in the form of a basic staff), and is traditionally made from red or white oak.

The sai is a three-pronged truncheon sometimes mistakenly believed to be a variation on a tool used to create furrows in the ground. This is highly unlikely as metal on Okinawa was in short supply at this time and a stick would have served this purpose more satisfactorily for a poor commoner, or Heimin. The sai appears similar to a short sword, but is not bladed and the end is traditionally blunt. The weapon is metal and of the truncheon class with its length dependent upon the forearm of the user. The two shorter prongs on either side of the main shaft are used for trapping (and sometimes breaking) other weapons such as a sword or bo. A form known as nunti sai, sometimes called manji sai (due to its appearance resembling the swastika kanji) has the two shorter prongs pointed in opposite directions, with another monouchi instead of a grip.

The tonfa supposedly originated as the handle of a millstone used for grinding grain. It is traditionally made from red oak, and can be gripped by the short perpendicular handle or by the longer main shaft. As with all Okinawan weapons, many of the forms are reflective of “empty hand” techniques. The tonfa is more readily recognized by its modern development in the form of the police nightstick but its usage differs.

A nunchaku is two sections of wood (or metal in modern incarnations) connected by a cord or chain. There is much controversy over its origins: some say it was originally a Chinese weapon, others say it evolved from a threshing flail, while one theory purports that it was developed from a horse’s bit. Chinese nunchaku tend to be rounded, whereas Okinawan ones are octagonal, and they were originally linked by horse hair. There are many variations on the nunchaku, ranging from the three sectional staff (san-setsu-kon, mentioned later in this article), to smaller multi-section nunchaku. The nunchaku was popularized by Bruce Lee in a number of films, made in both Hollywood and Hong Kong. This weapon is illegal in New York State, Canada, and parts of Europe.

The kama is a traditional farming sickle, and considered one of the hardest to learn due to the inherent danger in practicing with such a weapon. The point at which the blade and handle join in the “weapon” model normally has a nook with which a bo can be trapped, although this joint proved to be a weak point in the design, and modern day examples tend to have a shorter handle with a blade that begins following the line of the handle and then bends, though to a lesser degree; this form of the kama is known as the natagama. The edge of a traditional rice sickle, such as one would purchase from a Japanese hardware store, continues to the handle without a notch, as this is not needed for its intended use.

The Jo is a short staff used in Seishin Kubudo such . Jo staffs are made of wood (traditionally Oak) and are roughly 4 feet in length. In contrast, a  Bo approximately 6 feet in length.

Jojutsu techniques differ quite a bit from Bo techniques due to the shorter length and faster speed of the weapon however some of the blocks, thrusts and strikes used in Bojutsu can be applied to the Jo. Kenjutsu (Kattana or  Bokken) techniques can also be adapted to the Jo making it a very versatile and effective weapon.

A bokken “wood”, and ken, “sword”) (or a bokutō 木刀, as they are instead called in Japan) is a Japanese wooden sword used for training. It is usually the size and shape of a katana, but is sometimes shaped like other swords, such as the wakizashi and tantō.