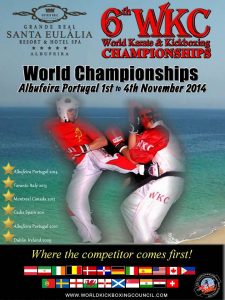 The World Karate & Kickboxing Council’s (WKC) 6th World Championships took place in Alberfeire Portugal on the 1st-4th of November. Ireland was represented by “Team Ireland” which consisted of  6 members from the East Coast Martial Arts Club which is based in Laytown, Brendan Donnelly Instructor and WKC president for Ireland, Saoirse and Emer  O Donnell, Molly and Dave Carolan and Luis O Connor.

Over the past year in preparation for the World Championships the team took part and were successful in  several National tournaments including the Drogheda Cup, “The Best of The Best” and the Irish Cup.

The team took part in various events at the World Championships, individual kata, team kata, traditional weapons Kata, Points fighting and continuous light contact fighting, the hard work paid off with the result of 4 Bronze Medals for Ireland. Team Kata, Emer O Donnell, Saoirse O Donnell and Molly  Carolan picked up 3 Bronze and another Bronze for Saoirse O Donnell in the individual kata. Luis O Connor was unlucky to get injured fighting on day one of the tournament , however he was brave and willing enough to step out for his country on the second day of fighting; unfortunately he did not get placed in the medals but gained valuable international experience for himself and to pass on to others who would like to compete at this level. 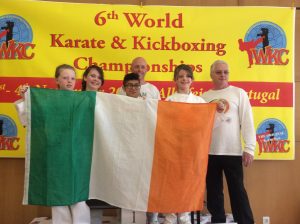