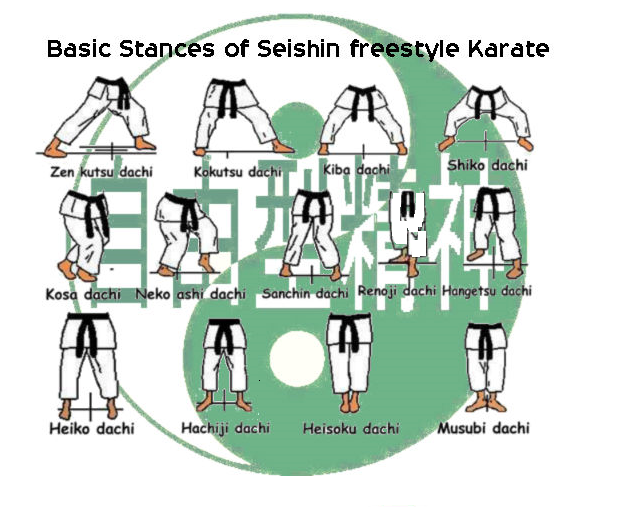 Front stance, sometimes also called forward leaning stance or forward stance, is a basic stance used in various Asian martial arts. Although the specifics of the stance vary by style, overall it is visually similar to a lunge, with the forward leg bent at the knee, and the rear leg straight, while the hips and shoulders remain squarely facing forward. The purpose of the stance is to teach musculo-skeletal alignment that adds as much mass of the earth to a strike as possible. The stance allows a great deal of power generation forward, but very little in any other direction.

In all these stances the knees are bent very slightly. There are no stances where weight rests on a leg with a completely straight knee.

Heisoku-dachi (閉足立, Feet together stance)
Feet together. This is usually a transitional stance, although it is used as the ready stance in some kata.

Musubi-dachi (結び立, Joining stance)
Heels together, toes open at about 45 degrees. This stance is used to perform the formal respectful bow, rei (礼).

Hachiji-dachi (八字立, natural stance, literally “stand like the character 八”)
The feet are shoulder width apart, toes open at 45 degrees. Sometimes this stance is called soto-hachiji-dachi (外八字立). This is the basic ready stance in Karate.

Uchi hachiji-dachi (内八字立, literally “stand like the upside-down character 八”)
The feet are shoulder width apart, toes facing inwards at 30-45 degrees, knees tense. This stance is used in some formal exercises, for example the tsundome. Also called Chun’be or Naifanchin-dachi.

Heikō-dachi (平行立, parallel stance)
The feet are shoulder width apart, and their outer edges are parallel. This is a common transitional stance in many kata.

Side Seisan Like the forward-facing Seisan stance, the feet are aligned the same but pointed off to the side at a 25-30 degree angle.

Sagi-ashi-dachi (鷺足立 Heron-foot stance) also known as Tsuru-ashi-dachi (鶴足立 Crane-foot stance)
This is the stance on one leg, where the other leg is raised and bent so that its foot touches the knee of the base leg. The exact form of contact between the foot and the knee depends on the style or even on the particular version of the kata where this stance is used. For example, different versions of the kata rōhai use different sagi ashi dachi.

Naihanchi-dachi (內步進立)
The feet are wider than the shoulder width, with their outer edges parallel. Legs and buttocks should be tensed upwards, while keeping the weight low and the knees bent inwards. This stance has strong tension in the legs and is the basis of the kata Naihanchi.

Sanchin-dachi (三戦立 Three Battles stance)
The stance is fixed and tensed in the same way as Naihanchin-dachi. It can be described as Uchi-hachiji-dachi with one foot moved forward until the toes of the rear foot are on the same horizontal line as the heel of the front foot. This powerful stance is used in the multitude of katas attributed to Kanryo Higashionna, from Sanchin to Suparimpei. Many advanced breathing techniques are exercised in this stance.

Hangetsu-dachi (半月立, Halfmoon stance)
A version of sanchin used in some karate styles, particularly Shotokan. This stance is longer than sanchin-dachi, but retains the same tension and inward rotation of the knees. It is the basis of the kata Hangetsu.

Moto-dachi (基立, Foundational stance)
The stance is shin length and around two fist widths wide, with both legs slightly bent, the front foot facing straight forward and the back foot pointed outward at about 20-30 degrees. The body should be squarely forward unless a half-turn han-mi is applied. The basic ready stance for kumite is Moto-dachi.

Kiba-dachi (騎馬立, horse stance or rider stance)
Feet are parallel and wide, weight is central and low, with the back straight and the knees and feet pointing slightly inwards. This stance is not used in all styles of karate because of strong tension that it requires, instead it is often replaced by Shiko-dachi.

Shiko-dachi (四股立, square stance, often called horse stance where kiba-dachi is not used)
Same as Kiba-dachi but the toes face out at about 45 degrees.

Zenkutsu-dachi (前屈立, forward stance)
This is a long frontal stance where the weight is mostly on the front leg. It has exactly the same height as shiko-dachi, but the rear leg is completely straight at the knee and extended back. The front foot is placed frontal (toes facing forward), the rear foot is turned out 30 degrees, just like Moto-dachi, but never 90 degrees as seems natural to new practitioners because this precludes any forward motion. The heel of the rear foot rests on the ground. Zenkutsu-dachi is one of the most common stances in kata.

Nekoashi-dachi (猫足立, cat foot stance)
All weight rests on the back leg, which is bent at the knee. The rear foot is turned at about 20-30 degrees out and the knee sits at the same angle. Only the toes of the front foot rest on the ground, positioned in front of the back heel at about the same distance as the front foot of moto-dachi. There is no weight on the front foot, and there is no bent in the ankle joint – front knee, front shin, and the rise of the foot (but not the toes) form a single line, vertical in Shitō-ryū, tilted in Shotokan.

Fudō-dachi (不動立, unshakable stance) also called Sōchin-dachi (壯鎭立) after kata Sōchin
The body is positioned similar to shiko-dachi turned either 45 or 90 degrees to the side, except for the head which still looks forward. The front foot moves one foot-length forward, increasing stability and making it possible to perform a strong attack with the rear foot.

Kōkutsu-dachi (後屈立, back long stance)
This is a mirror image of zenkutsu-dachi, where the rear leg is bent strongly at the knee and the front leg is either straight or slightly bent, depending on the style. The rear foot is turned 90 degrees to the side. The body is turned 90 degrees or more away, except for the head which looks to the front. Kokutsu-dachi is a great defensive stance because of the amount of energy stored in the rear leg, ready for a counter-attack.

Sōkutsu-dachi (側屈立, side long stance)
Often conflated with kōkutsu-dachi, this is a variant of kōkutsu where the head faces the direction perpendicular to the line on which the feet stand.